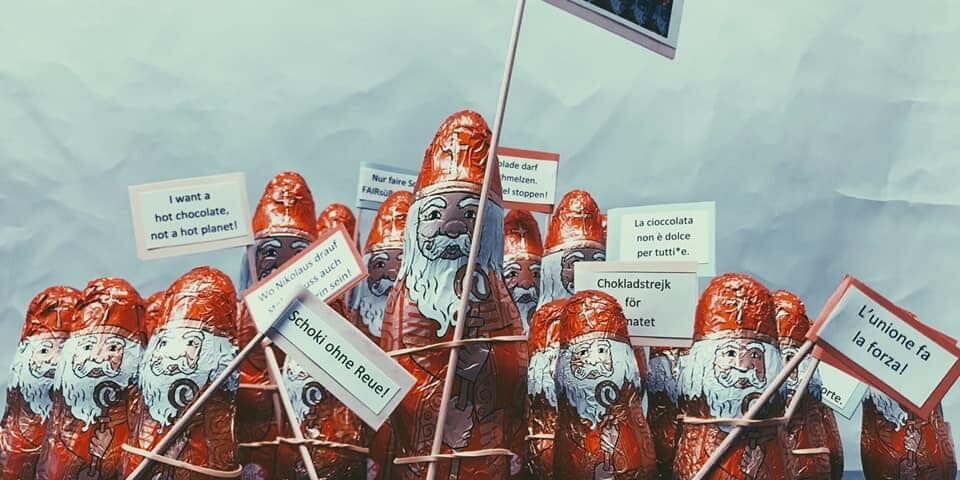 Everybody knows him, everybody loves him – chocolate Santa Claus.

Chocolate Santa Claus make us happy, but not the cacao producers at the equator. To point out to the unfair conditions in the cacao production, plenty chocolate Santas demonstrate due to the coronavirus on Facebook and Instagram and in the South Tyrolian World Shops until December the 6th. To spread the message within the South Tyrolian population, they use all kinds of transportation. Obviously, as environmentally friendly as possible!

In Western Africa’s countries, such as Ivory Coast and Ghana, 90% of the small-scale farmers are dependent on the cacao production. The farmer’s income consists solely of half a euro per day and is far below the poverty line with its 2€ per day.

Fair Trade contributes to improve the people’s living and working conditions at the beginning of the value chain and to strengthen their political and economical position. The World Fair Trade Organisation unites 412 Fair Trade organisations along the entire value chain, from producers to importers and retailers thereby creating a unique global network.

•Cacao achieves annually a 100-billion-euro turnover worldwide. Plenty of parties would like to have a share of the huge chocolate cake: according to the Association of Chocolate, Biscuit & Confectionery Industries of Europe CAOBISCO 12,000 factories in Europe engage themselves in the cacao processing. Nevertheless, 5.5 million cacao producers merely see crumbs of it. Currently producers earn only 6.6 % of the selling price of a chocolate bar in the South Tyrolian shops.

•The cacao value chain is characterised by a strong market concentration:
Three companies dominate the cacao processing. Barry Callebaut (29 %), Cargill (19 %) and Olam (17 %) keep themselves in the background, but control approximately 65 % of the entire cacao harvest and therefore highly influence the cacao price.

•Estimated 2 million children in western Africa working in the cacao production are being exploited. Child labour is thereby solely symptom of larger, underlying problems: the great poverty families are suffering from, the shortage of schools and good quality education, the insufficient local infrastructure and the lacking awareness of the importance of education.

•The annual per-capita consumption of chocolate in Germany is 12.2 kg. The average Italian consumes 3.9 kg per year. Numbers for South Tyrol are currently not existing.